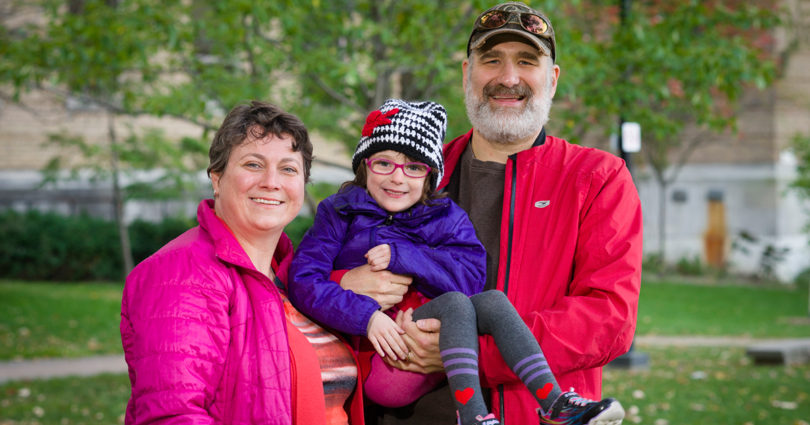 Posted at 16:11h in Your stories by neo
Share

Natasha’s eyes light up when her father Ian asks if she wants to go on his shoulders. The energetic five year old doesn’t hesitate in signing back, “Yes, please!” Both father and daughter giggle as she tickles his beard from her vantage point.

Flash back to April 2011 and it was a much less certain time. Ian and his wife Kirsten, who live in Kingston, were visiting her sisters in Toronto to pick up some baby clothing. Almost into her 26th week of pregnancy, she started to bleed and was admitted to Sunnybrook’s High Risk Obstetrical Unit. Ian returned to work in Kingston with the understanding this was just a small, and not serious, bump in the pregnancy.

“You just don’t think about prematurity, it’s not even something on your mind during a healthy pregnancy,” says Kirsten, who assumed she would return home to Kingston to continue her pregnancy.

Instead, she delivered Natasha. Ian recalls, in a haze, receiving the phone call from Kirsten, who was crying and saying, “I had the baby.” He hastily threw some things in a suitcase and left for Toronto, admitting he doesn’t recall the drive due to worry.

Their next 116 days, with Natasha in the neonatal intensive care unit (NICU), were full of emotional ups and downs. Ian, a neuroradiologist, could read Natasha’s brain ultrasounds as they were being performed, and saw that she had periventricular leukomalacia, or PVL, a brain-related condition that’s closely tied to premature babies.

“We had grave concerns about Natasha’s prognosis in terms of what her quality of life would be,” says Ian. “We asked for a meeting and the whole team, everyone from neonatologists to occupational therapy, sat down with us and listened. Our concerns were never minimized, which was so empowering.”

Ian and Kirsten attended daily rounds with staff and were taught to do as much as they could at the bedside. “Sunnybrook is amazing at getting parents involved. It’s a scary situation for moms and dads who are nervous to touch their baby. But staff were so compassionate, they understand how difficult it is for parents and want to help you bond with your child,” explains Kirsten.

For the family, bonding meant hand-hugging, changing diapers and Kangaroo Care, their favourite time with Natasha. “We did close to five or six hours of skin-to-skin care with her each day. Instead of feeling helpless, you’re contributing to your baby’s care by doing something that helps them so much,” adds Ian.

One pleasant surprise was the frequency of visits from members of Sunnybrook’s Neonatal Follow-Up Clinic, which started while Natasha was still in the hospital. Maureen Luther, neonatal physiotherapist, visited to help with stretches for Natasha’s arms and legs and helped with feeding. Dr. Paige Church, Medical Director of the Neonatal Follow-up Clinic, visited frequently to answer questions about next steps in Natasha’s life.

“The hardest part is the waiting, and not knowing,” says Ian. At seven weeks age, corrected, Natasha was found to have profound hearing loss in both ears.

Fully bilingual in English and ASL, hearing loss hasn’t stopped Natasha, who loves taking karate and gymnastics. In senior kindergarten at Sir James Whitney School for the Deaf in Belleville, she’s reading a year ahead of her age. Whenever they’re in Toronto, the family tries to visit the NICU and the Neonatal Follow-Up Clinic, to catch-up with the staff who have become like family.

“We wouldn’t be where we are today without the care of the teams in the NICU and Neonatal Follow-Up Clinic. We were considered part of the team, they truly partnered with us,” says Ian, and smiles at Natasha as she signs “I love you” to her Dad. “We are forever thankful.”